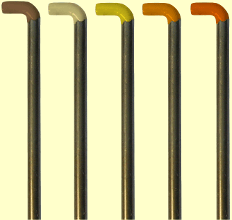 Use Lime for cross-bred and coarse wools, such as Romney, Leicester or Lincoln, and fibres of similar or coarser diameter, such as Mohair, human hair and Hemp and Linen.
Lime is a thick needle and should not be used with medium and finer fibres, (such as Merino or Alpaca)

Use Green for early stages of felting coarse (cross-bred) wools. Green can also be used with medium wools such as Corriedale and Halfbred where the presence of pronounced puncture marks is not an issue.
Green has close barb spacing for fast action.

Green has high penetration resistance and becomes difficult to use as felt becomes firmer, so change to needles such as Pink or Red.